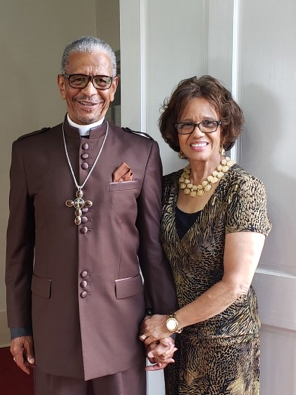 Prior to becoming pastor of Calvary in August 1988, He served at Wheat Street Baptist Church in Atlanta Ga where Dr. William Holmes Borders was his pastor
In 1979, he accepted his calling into the ministry and was licensed to preach the gospel. He preached his trial sermon at Lampton Baptist Church Louisville, Kentucky where the Rev. Jim Miller is pastor.

Pastor Smith came to Calvary as a man of visions and dreams that the people of God be blessed spiritually, mentally, physically and financially.

He’s made many noteworthy accomplishments such as increasing worship service from twice a month to every Sunday. The introduction of tithes and offerings was a major transition, teaching the people to give God what rightfully belonged to Him.

Pastor Smith has had the opportunity to travel to various Biblical locations such as Jerusalem, Greece, Island of Patmos, the Seven churches of Asia Minor and Rome just to name a few. He also worked with the Middle East Travel group and assisted in building a house for Habitat for Humanity in Habakkuk Jordan.

In 2009, He received an Honorary Doctorate of Divinity Degree in Theology and a Doctorate of Humanitarian degree from Carolina Christian College.

Pastor Smith serves as Vice-President of the Congress of Christian Education an entity of The Madison Missionary Baptist Association where Dr. William Smith is the Moderator.

He also serves as Chancellor of the Walk of Faith Bible Institute held in the Hoke L. Smith Education Building in Madison Ga.

Under Pastor Smith’s leadership of 33 years at Calvary Baptist Church many souls have been saved and various ministries have been established for the up building of God’s kingdom.

Pastor Smith is married to the former Annie Cotton and they are blessed with four daughters, one son and eight grandchildren.

TO GOD BE THE GLORY!